Skip to content
< 99%? I'm the 10%! | Song des Tages >
Some weeks ago a friend moving far away left me some books to read and pass on to "the worthy" . So here we go, another friend is visting tonight and although he didn't know yet, he'll take the first piece with him: 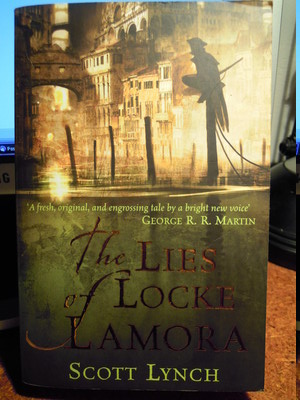 "The Lies of Locke Lamora" by Scott Lynch - an entertaining read.

Scott Lynch's "The Lies of Locke Lamora" turned out to be a quite entertaining book. The setup of the book is kind of medieval, but also includes fantasy and even science fiction elements. Think of Charles Dickens, subtract the moral instructions and add a small dash of Terry Pratchett. Well, compared to Dickens/Pratchett it's not that well written. Basically it tells the story of Locke Lamora, an orphan stealing for a living and over the years becoming the mastermind of the gentleman bastards. This group is smart, well educated and trained, but also calls for trouble by making their schemes bigger and bigger. Desaster calls. If you like it, there is more: Several sequels are planned, but only one is published so far. I'm in the middle of it right now and it's also a nice read.

So, the book is out there and when ever _YOU_ get your hands on this book, let me know (gentlemanbastards @ gegenglueck . org - remove the blanks)

PS: Yes, I know about bookcrossing, I like the idea, but first of all I don't want to print labels.

Trackback specific URI for this entry